Do you know about the ‘shellfish when there is an ‘R’ in the month’ rule?

There’s a long-accepted old wives’ tale that we should only eat shellfish when there’s an ‘R’ in the month. According to the rule, we should only indulge indulge in delicious oysters, clams, and mussels from September through to April and stop eating them completely between May and June!

But where does this curious lore come from? And is there any substance to the claim that we should avoid eating shellfish in the months of May, June, July, and August? Let’s take a look now.

The origins of this curious wives’ tale.

In 1599, Englishman Henry Buttes produced a cookbook entitled Dyets Dry Dinner that advises on consuming oysters in the summer months in the Northern Hemisphere. While many people widely accept this as the source of the tale, a select few trace it back even further and suggest it has its roots in an ancient Latin saying, as revealed by Live Science.

But a recent study mentioned in Science Daily reveals that for 4,000 years people have been eating shellfish when there’s an ‘R’ in the month. The study analysed a large shell ring off the coast of Georgia, and found that the ancient inhabitants of St. Catherine’s Island limited their oyster harvest to the non-summer months. While they might not have had a fancy saying for their practice, it was rooted in common sense.

Long before refrigeration was able to preserve oysters and shellfish, they would quickly spoil in the summer heat. Moreover, the summer months in the Northern Hemisphere are traditionally spawning seasons for oysters, meaning that the vast majority of their energy is invested in reproduction. This means that the meat within the shells is often unpleasantly thin and stringy.

In essence, it just made sense to avoid catching and eating oysters in the warm summer months when they were busy reproducing, and efforts were focused on the plentiful harvests available later in the year.

What about ‘The Red Tide’ and toxic algae?

Another good reason to avoid oysters and certain other shellfish in the summer months is due to a phenomenon known as ‘The Red Tide.’ Within the summer months, the oceans where oysters reproduce are said to contain high concentrations of algae that are toxic when consumed by humans. The name comes from the massive blooms of plankton that discolour the water, releasing toxins into the ocean.

Should you consume shellfish that has absorbed this toxic algae, you are likely to get sick and suffer a condition known as paralytic shellfish poisoning. However, the positive is that harvesting oysters is banned during these times and the industry has strict measures to monitor Red Tide levels.

Shellfish is also regularly tested for toxins, making it extremely unlikely for a fishmonger or supermarket to sell you contaminated oysters, mussels, or clams. Equally, a large majority of shellfish is farmed in the present day instead of being harvested from the wild. This further reduces the risk of consuming shellfish contaminated by toxins. So, although toxic algae do present a real threat to wild oysters at times of ‘The Red Tide,’ thanks to industry regulation, it’s not something that everyday consumers need to worry too much about.

When people first started avoiding shellfish in the summer months, it was predominantly because they would quickly spoil, and the fact that the meat was less desirable due to the spawning season. It was also nigh on impossible to monitor the toxins carried in ‘The Red Tide,’ which made wild oysters and other shellfish largely unsafe for consumption during the summer months without an ‘R.’

But in the 21st century, life has changed dramatically.

Refrigerating and freezing techniques of the present-day mean that oysters can be harvested and then preserved for much longer periods without spoiling. The fact that the industry is also adept at monitoring ‘The Red Tide’ and preventing wild harvest during these periods makes the risk of contamination much easier to manage. Add to this that more than half of the seafood consumed today is from farming, and the likelihood of becoming sick from consuming contaminated shellfish is significantly reduced.

But this doesn’t mean you should ignore the seasonality of shellfish. Eating shellfish and other fish that are in season is a sustainable way of enjoying seafood and is also an excellent way of varying your diet by not always relying on the same catch. While it’s safe to enjoy shop-bought mussels, oysters, and clams all year round, it doesn’t necessarily mean that you should.

Pop in and speak to Darren about seasonal catch.

While it was once necessary to avoid oysters and other shellfish in the months with the letter ‘R,’ the reality is that it’s no longer particularly relevant. But if we’re to truly move towards a more sustainable fishing and seafood consumption model, we need to think more carefully about the seafood we consume and when we enjoy it.

Speaking to your Darren instore about what is currently in season.

Eating seasonal seafood is sustainable and good for the environment at the same time. What’s more, it ensures that overfished populations can recover. 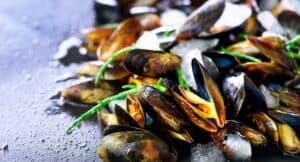 Do you know about the ‘shellfish when there is an ‘R’ in the month’ rule? There’s a long-accepted old wives’ tale that we should only