Now, let’s be honest, the only reason you’re here is to learn about the fish pie origin.

A close relative of the satisfying Shepherd’s pie, fish pie – or fisherman’s pie – is lovingly made with cuttings of white fish, prawns, and other seafood, before topped with creamy, cheese-infused mashed potatoes.

Fish pie is a perfect recipe to throw together when you have some delicious seafood to use up, as you can include a whole range of fish in your recipe.

Needless to say, it’s a great dish to serve up to your hungry family on these long winter nights, and it has been a firm family favourite in Britain for generations.

So, given the overwhelming popularity of the humble fish pie, we thought it would be interesting to dive into the history of this British classic to find out why it was able to assert itself as a mainstay of British cuisine. Ready to join us?

A Roman Homage to the Goddess Venus

Curiously, the British enjoyment of fish was probably brought to these shores by the Romans – which is quite the beginning for our fish pie origin story.

Sometime after Julius Caesar brought his first Roman military expedition to the land of the Britons in 55BC, the practice of eating fish more regularly was introduced to the populace.

Sometime during the Roman conquests (it’s impossible to say precisely when!), the Roman habit of eating fish mainly on a Friday rubbed off on the people they were there to divide and rule.

It is said that the reason why the Romans initially ate fish on a Friday was to honour Venus, the goddess of love.

But given that she encompassed the Roman values of love, beauty, desire, and fertility, it’s not overly clear why the Romans chose to honour her in this way!

Nevertheless, as fish was readily available in the waters around the British coastline, it’s little surprise that the Romans made use of the catch to feed their people.

Christianity and Fasting in the Middle Ages

Granted, there’s no evidence that the Romans actually introduced a fish pie recipe to the British, but their presence paved the way for seafood to be more regularly enjoyed throughout the kingdom.

When the Romans departed and Christianity in Britain became widespread, many citizens practised regular fasting when they refrained from eating meat, and fish presented itself as a viable alternative.

It was during Lent – the forty-day fasting period that Christians adhere to before Easter – that the concept of fish pie became popular sometime in the Middle Ages.

Some of the earliest fish pie recipes are a far cry from today’s delicious mixture of savoury veggies and seafood, however.

We may have jumped the gun a little here, as there’s evidence that fish pies weren’t started by Christian paupers of the Middle Ages; rather, they were presented to Royalty during the 1100s at the time of Henry I. This certainly adds a twist to our fish pie origin story!

When Henry I assumed power, he was supposedly presented with a Christmas lamprey pie every year. Obviously crazy about seafood, the famous ruler started another tradition that saw Yarmouth cooks send the monarch two dozen pies containing 100 herrings each year!

Fast-forward to 1530 and the reign of another Henry, and the custom of a royal fish pie became a thing in Britain once again. This time, the Prior of Llanthony in Gloucester decided to bake eels and carp into a pie for Henry VIII.

It’s not clear whether this became a regular gift for the kings and queens of the Middle Ages, but the presentation of a ‘royal’ eel pie was confirmed in 1752 when a London-based bakery sent one to the Prince of Wales at the time.

As you can see from this somewhat plotted history of the quintessential British pie, it’s been on quite the journey throughout history!

From a symbolic ode to a Roman goddess to a Christmas treat for Henry I, it’s frankly impossible to suggest that the famous fisherman’s pie that we all love and enjoy today is anything but British.

Thankfully, our tastes have changed considerably since the Middle Ages, and there’s less incidence of fish pies combining sweet and savoury delicacies.

After all, fish pie has been popular in Britain for thousands of years, and it certainly shows no signs of regressing in its popularity any time soon.

If you’d like to try our delicious fish pies, pop instore or order yours online today for delivery. 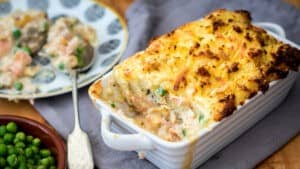 Now, let’s be honest, the only reason you’re here is to learn about the fish pie origin. A close relative of the satisfying Shepherd’s pie,