A question we’re always asked is what fish is in season in November?

As we approach the colder months of the year, we start to berate the poor weather and the lack of sun we get during the winter. But for those in the fish trade, November is a fantastic time to go fishing!

Seawater fish start to group up in the colder waters, which increases the volume fishermen are able to catch. Plus, in a similar way to humans, fish put on weight in the colder months to keep them warm. This higher fat content produces a healthier, tastier product filled with a healthy source of Omega-3.

But you asked what fish were in season in November; so we’re going to look at local plaice, seabass, Dover sole, brill and halibut.

Everyone’s favourite flat fish, plaice remain close to the Kent shore from April through to November feeding up ready for breeding season. This means the plaice you’re going to buy in store was caught off the Kent coast by Deal or Ramsgate.

December onwards sees plaice move away from the shoreline, into the deeper seas for breeding season and giving birth in January or February.

After giving birth, the plaice return to their pre-breeding forms and are best left alone for 12 weeks or so to fatten up ahead of the warmer months.

Order your plaice for delivery or collection from our online store.

Quite simply named sole for centuries until local fishermen added the ‘Dover’ part due to the high volume caught off the coast of our neighbouring town.

Dover sole is known to be found as far as Brighton all the way up to the straits of Margate yet the Goodwin Sands area is still the best place to catch this delicious fish.

Sole live near to the ocean floor protecting themselves from predators by hiding under mud or sand.

From late summer, they move away from the bottom of the ocean into shallower waters for feeding. After feeding, they migrate further offshore, back into deeper waters to begin spawning.

Order your Dover sole for delivery or collection from our online store.

One the best fish to enjoy all year round, seabass are arguably best enjoyed in the winter months when they’re at their largest.

However, that does come at a cost as the seabass tend to spend the winter months in the deeper parts of the ocean, compared to summer when they’re found in shoals in shallower waters.

Studies show that due to changing sea temperatures, seabass are being found further and further north when their most common locations were previously in and around the north east Atlantic and Mediterranean sea.

Take a look at the seabass on our home delivery menu.

Another species that belongs to the flat fish family, did you know that the eyes of the brill are on the left side of it’s head!

These unique creatures are known to feed in offshore sand and mud and are commonly found in water depths below 55m. They have been known to feed closer to home however, these sightings are rare.

We catch brill from all around the UK coastline.

Between August and December with excellent catches in the southern parts including some of the biggest numbers and largest catch at this time of year.

Take a look at the brill on our home delivery menu.

Officially the largest flat fish amongst the flat fish family, there’s evidence that suggests halibuts can grow to 15ft long and weigh 700lbs! There’s even a halibut museum in Norway; the only one in the world.

Fully grown halibut are most commonly found in water that is over 50m deep and when it’s time to spawn, head for depths of 1000m plus.

If you haven’t seen the picture of Darren holding one of the biggest halibuts we’ve had in the shop, well you can now below!

Take a look at the halibut on our home delivery menu.

Speak to Darren about seasonal catch.

Seasonal catch is always at the forefront in the minds of Darren and the team at Jenkins and Son Fishmongers.

Next time you pop in, why not ask them for their recommendations at this time of year. 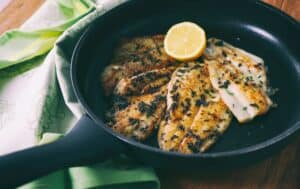 A question we’re always asked is what fish is in season in November? As we approach the colder months of the year, we start to